While getting ready for work around 8 am on Monday morning, I took one final look at the live tracking page and saw that the last two contestants were less than 1km away from reaching the finish line of the first edition of Legends Trails. They had started their odyssey 250km, more than 7000m D+ and over 60 hours ago. Out of the 47 men and women that started on Friday night, 6pm, 15 completed the event. I’m quite sure you’re not fully getting what an achievement this is. Read on!

Let’s start by highlighting what this weird 6pm start entails… I hadn’t thought about it myself before, until Michiel Panhuysen – an experienced ultra endurance athlete – pointed out this fact during his talk on mental preparation and coping with hardships during the training weekend in November. Starting at this time meant that the participants would spend roughly 40 out of the 60 hour deadline in twilight or total darkness. In other words, three nights and two days. The weekend had a new moon, meaning no help from a bright moon either.

The course itself is epic. It’s almost exclusively offroad, unmarked, and connects some of the wildest and most remote places the deep woods and rocky, muddy hills of southern Belgium have to offer. As if the terrain itself isn’t challenging enough, conditions were made worse by gruesome winter conditions. Snow, Ice, sleet, mud and general winter malaise. For those of you who don’t know south Belgium, think “Battle of the Bulge”. As I understood it, the name “Legends Trails”, originally coined for this one event, wasn’t solely meant to refer to the finishers as legends. These dark woods thrive with myths and legends of the historical figures, some supernatural, some real. It is these woods where whole Roman legions dissapeared. To save face, Caesar wrote in his Commentarii de bello Gallico: “Horum omnium fortissimi sunt Belgae” (Of all these [Gauls], the Belgae are the bravest/strongest). In this case, it was a German, but most of us pale in comparison to anyone who took up this challenge. 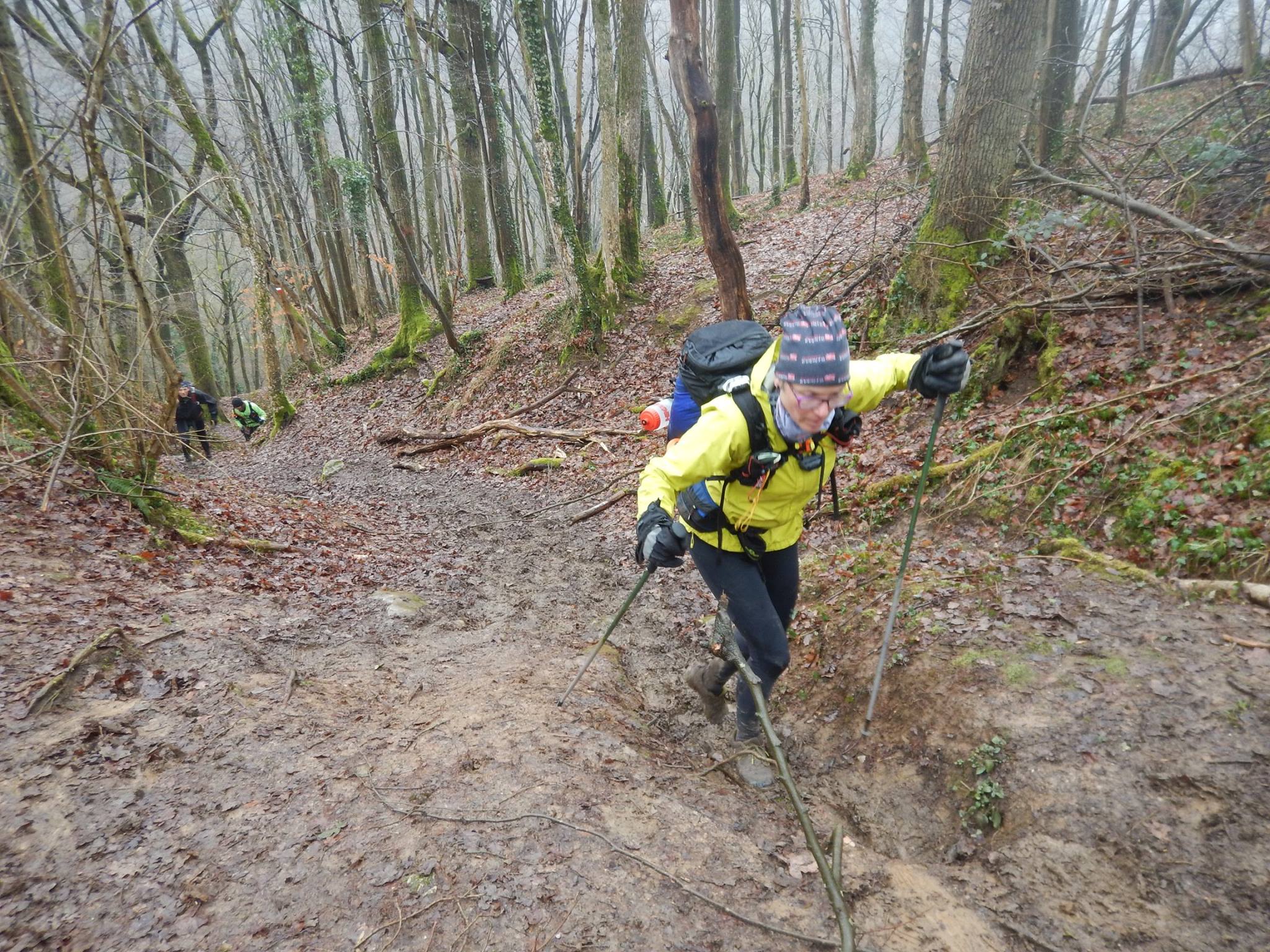 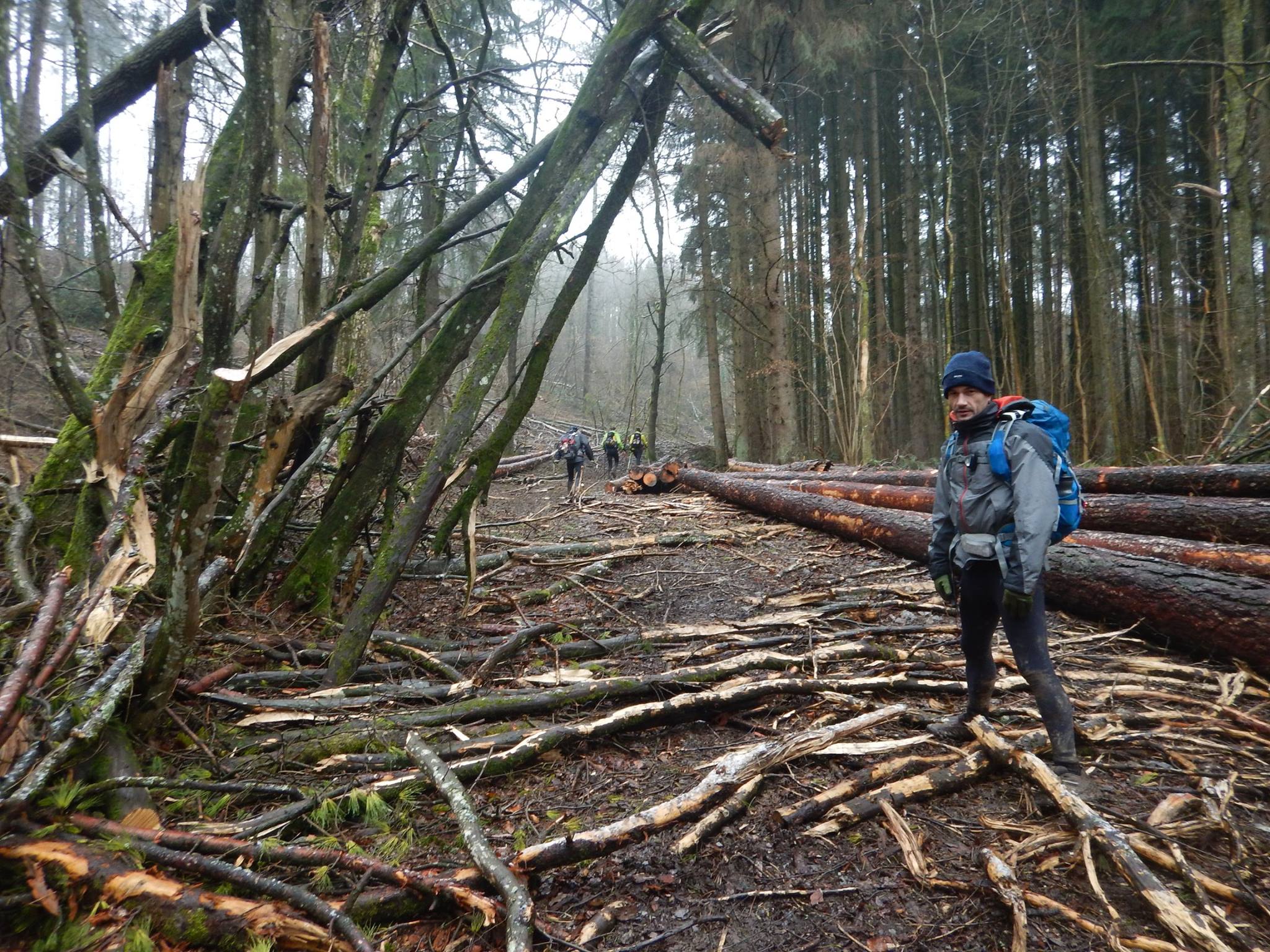 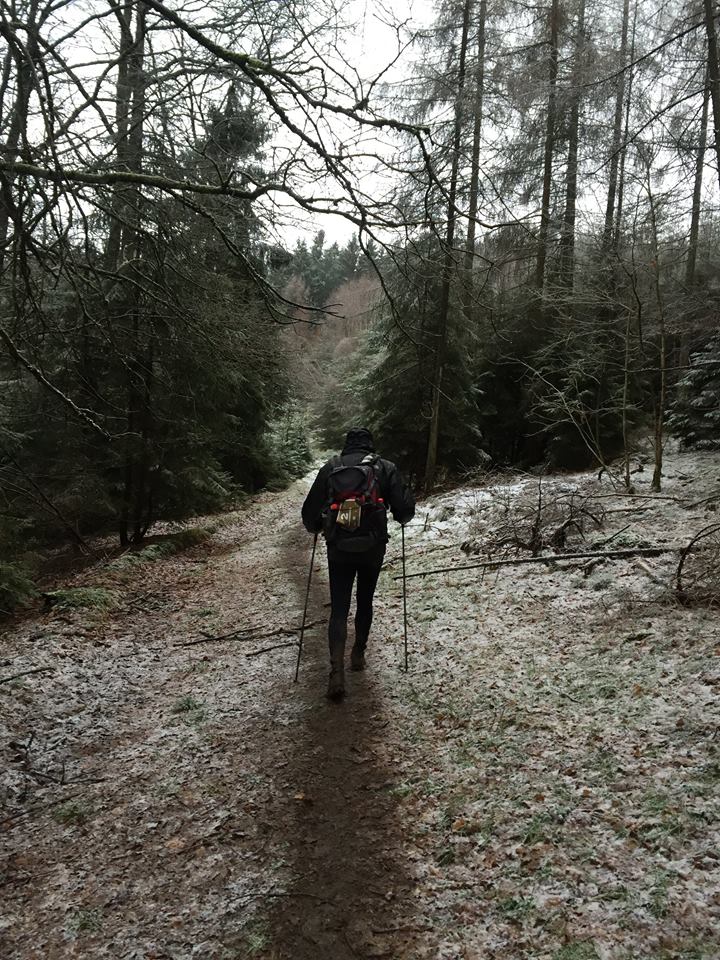 The first time I heard about Legends Trails must have been early 2015. Stef Schuermans approached me through my Facebook group Belgian Outdoor Addicts. I have to admit that I wasn’t quite sure what kind of person I was dealing with… Was this guy serious? Or was he a deranged lunatic?! (Sorry Stef, true story). As it turns out, he was quite serious about it all and he and his friend Tim De Vriendt put in a year of work to set it all up and – incredibly – recce the whole length of the trail at night. 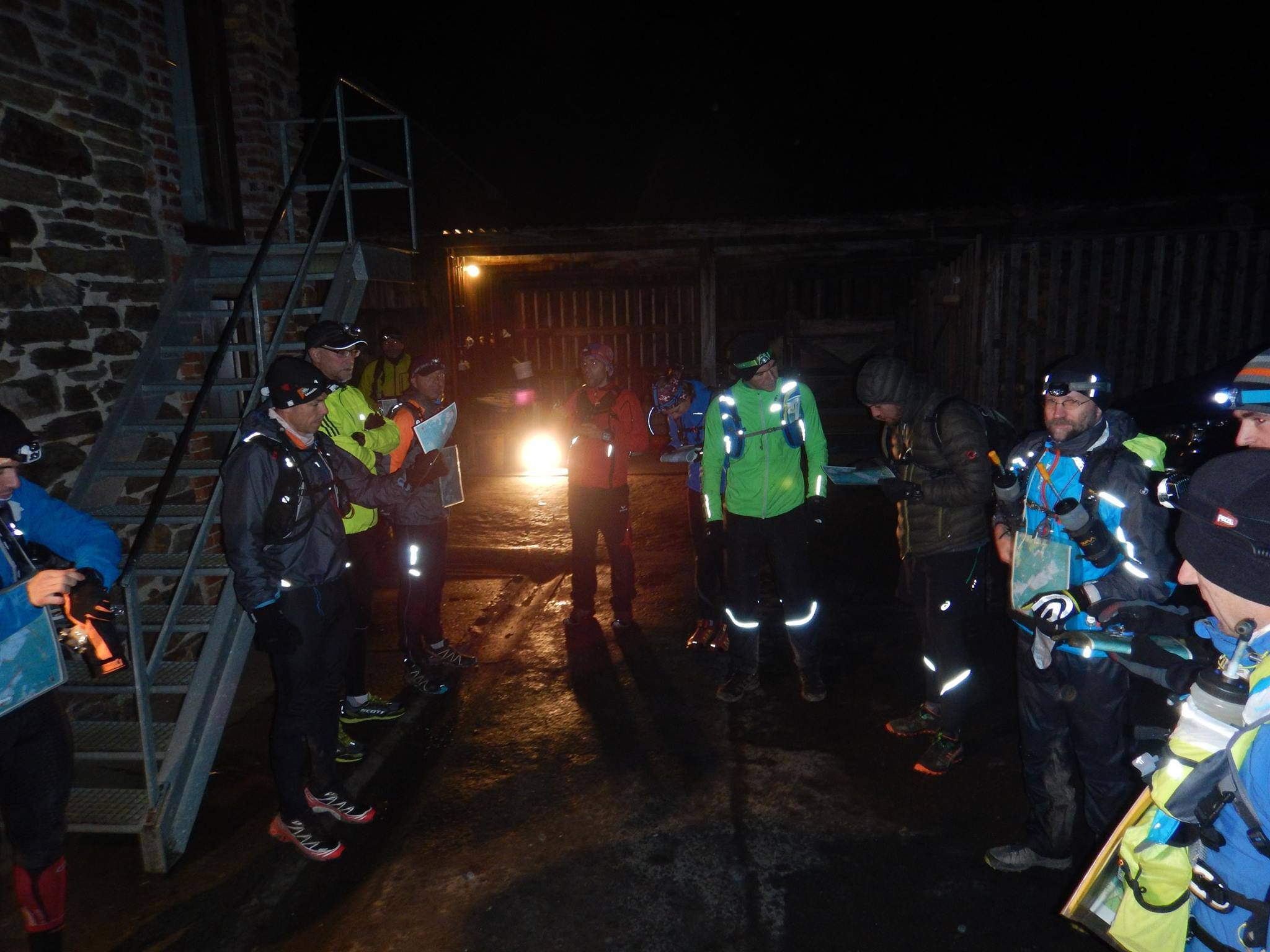 My first real feel of this challenge and the people involved came in November ’15. Tim and Stef had organized a training weekend where the prospective contestants could try out what it means to spend two days and two nights outside in winter conditions. They invited several speakers to talk about various subjects related to this type of event. Geert Meese – an experienced ultra athlete and doctor experienced in support roles for ultra endurance races – came to talk about potential health risks and taking care of yourself during races like this. Michiel mig Panhuysen screened his movie “Going Back Is Even Harder”, a self made film about his attempt at a double non stop Haute Route. Afterwards he talked about his approach of mental strength and how to get the most out of nearly no sleep. Then, there was me, invited to give a talk on practical hands-on map & compass navigation in this type of terrain. All I asked in return was to be allowed to participate in the training weekend. During these two days and nights, many of the participants had their first – for many schocking – experience of night navigation in dense dark woods. 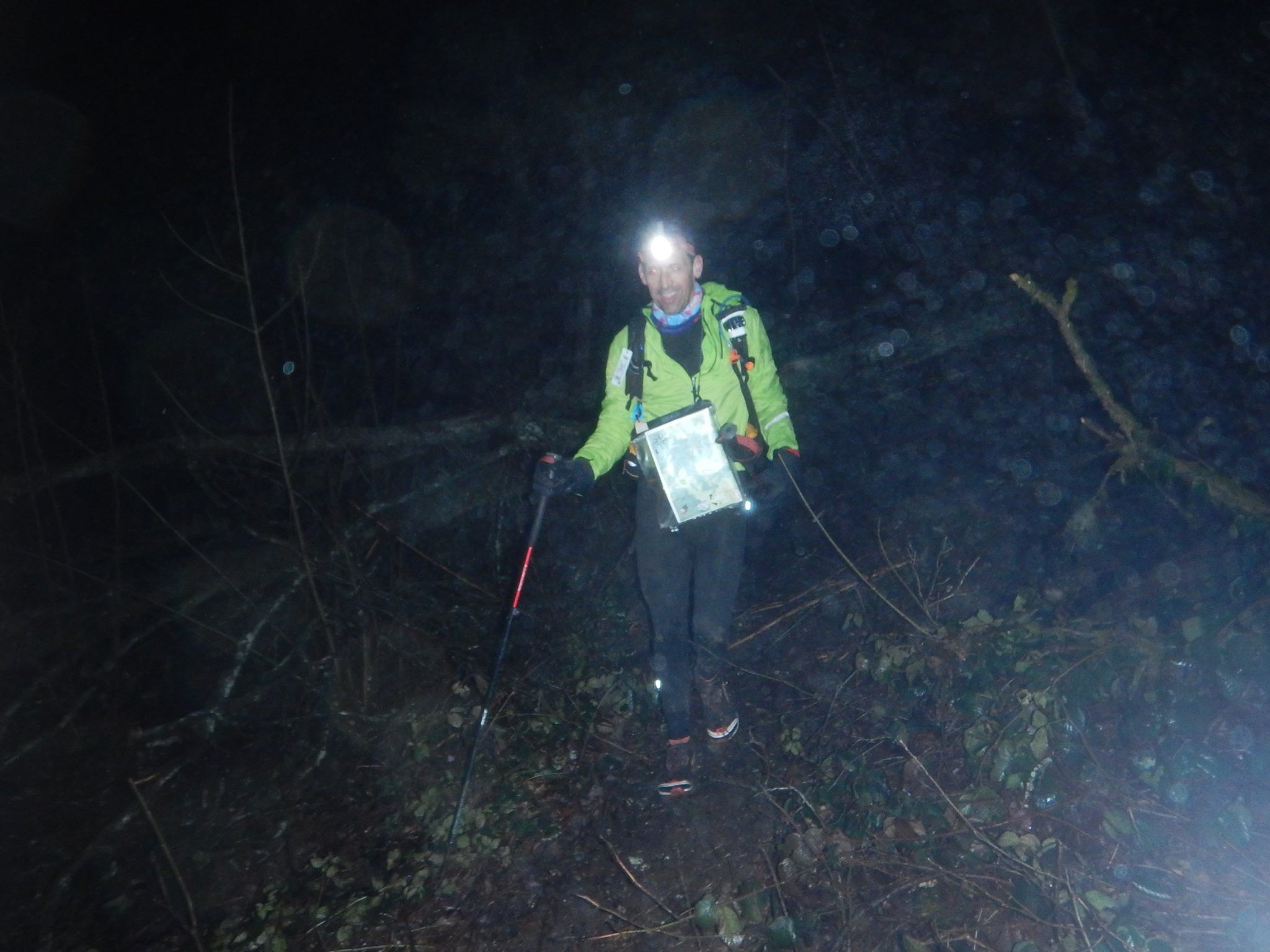 There’s something special in the air at these events. Minutes before the start signal was given, an almost silent group of 47 runners were on the verge of testing their limits, and they could feel it in the pit of their stomach. Most of them are very experienced endurance athletes – to be allowed into the race – they had to prove they had finished a 100km race – and had been training religiously for months. Every piece of kit carefully chosen, everything checked and checked again, last doubts and fears still on their mind. What a contrast with Spartacus Run style events where people pay large sums to (literally) start with loud pounding music and pyrotechnics shooting flames into the air. 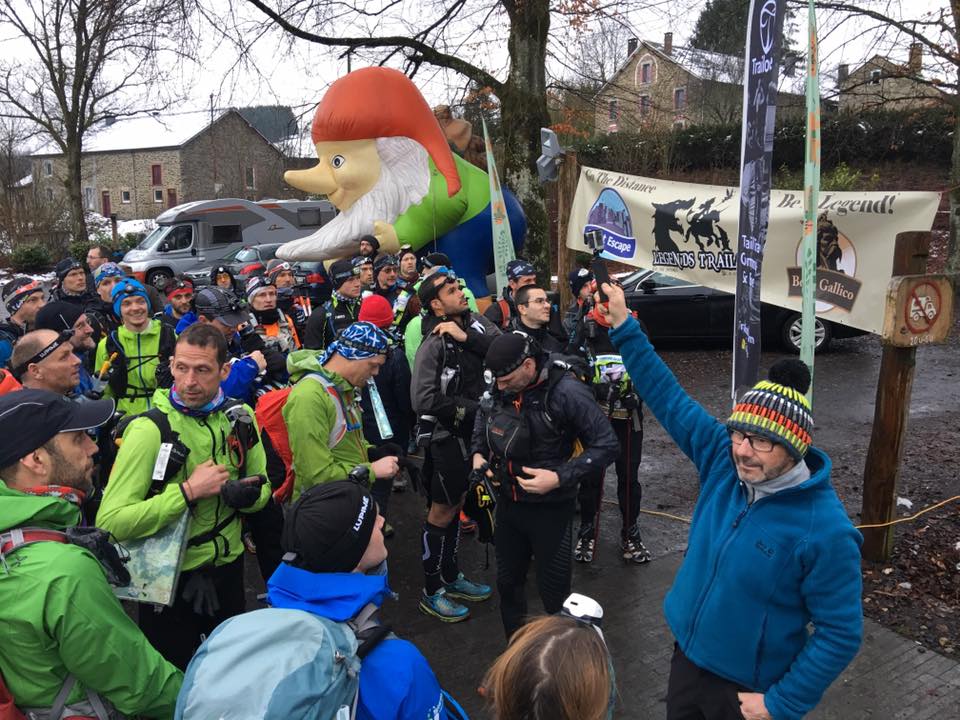 During the event, I was one of the men behind the mirror. A privileged court side position with a bird’s eye view of things. While Stef and Tim were troubleshooting and managing their 70+ volunteers, Wim and I were the Safety Coördination team lead by Stu Westfield – Mountain Leader, man behind Ranger Expeditions and Safety Team Coördinator of the infamous Spine Race, Britain’s most brutal race. In a room filled with maps, whiteboards and laptops, we monitored the GPS trackers of all the participants and teams spread over hundreds of kilometers of the most inaccessible terrain of southern Belgium. Around the clock, we took turns answering phones, redirecting teams and monitoring the individuals on the course. 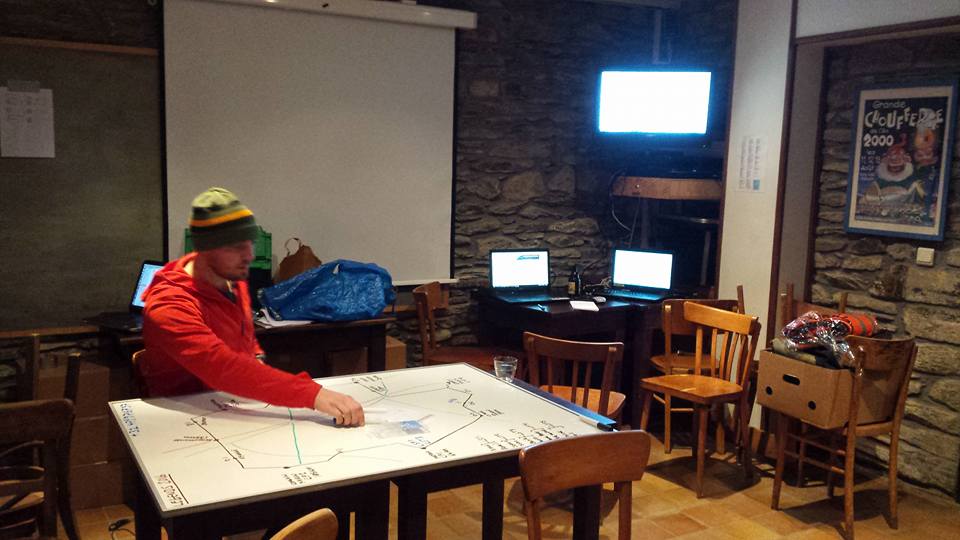 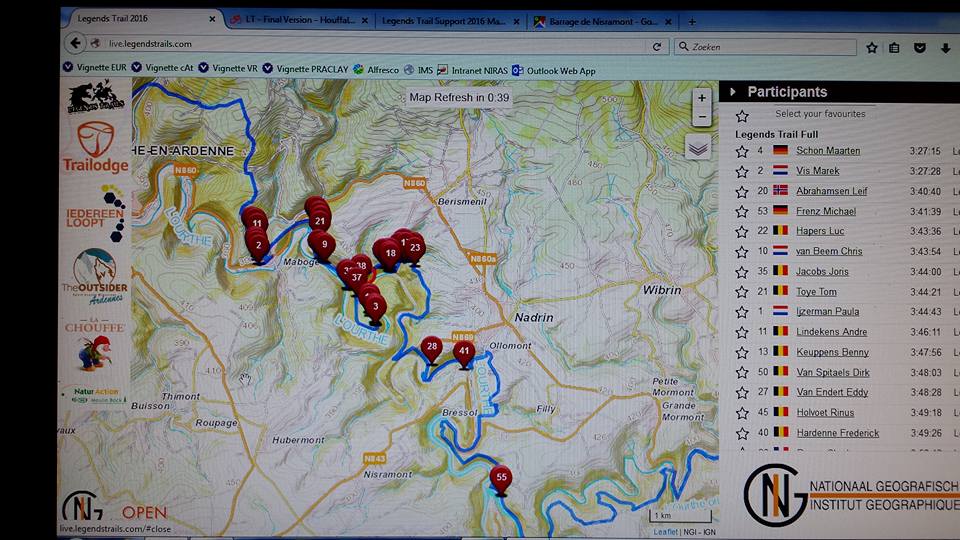 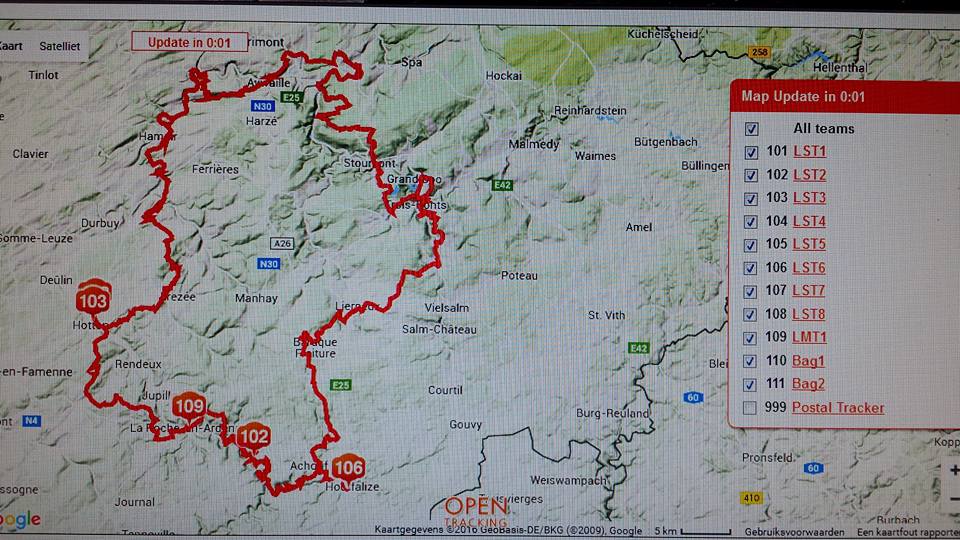 There’s something deeply personal about looking at dots moving on a screen in the small hours of the night. You’re constantly trying to imagine what this person is feeling, what thoughts are going through his/her head, what the terrain is like, what the weather is like. You see them making mistakes. You wish you could whisper into their ear and sometimes you literally pick up the phone to check up on what’s going on. After a while you can often predict what’s going to happen next by looking at the behavior of these “dots”.

There’s about a 5 minute delay between the feet on the ground and the dot on the screen, which created some challenging situations. At one point for example, we recieved a phone call of two people reporting their GPS had stopped working and that they no longer had any means of navigation. (Most participants ran the race following a GPS track provided by the race directors.) By then they were so beaten down with exhaustion they could barely think. We moved a man who had been transporting people that left the race and who had borrowed a GPS device from them close to their position, but he was unable to use the device. We had to talk him to their position on a forest track, keeping in mind he had no map and that his position on the screen was at least 5 minutes old. It felt a bit like sending instructions to a deep space probe haha. Funny fact… two of the dots that had obviously gotten into a car without warning us reported being rescued by their mom! On a more serious note, people calling in for a rescue rarely had to wait longer than 20 minutes before we got a team to them. 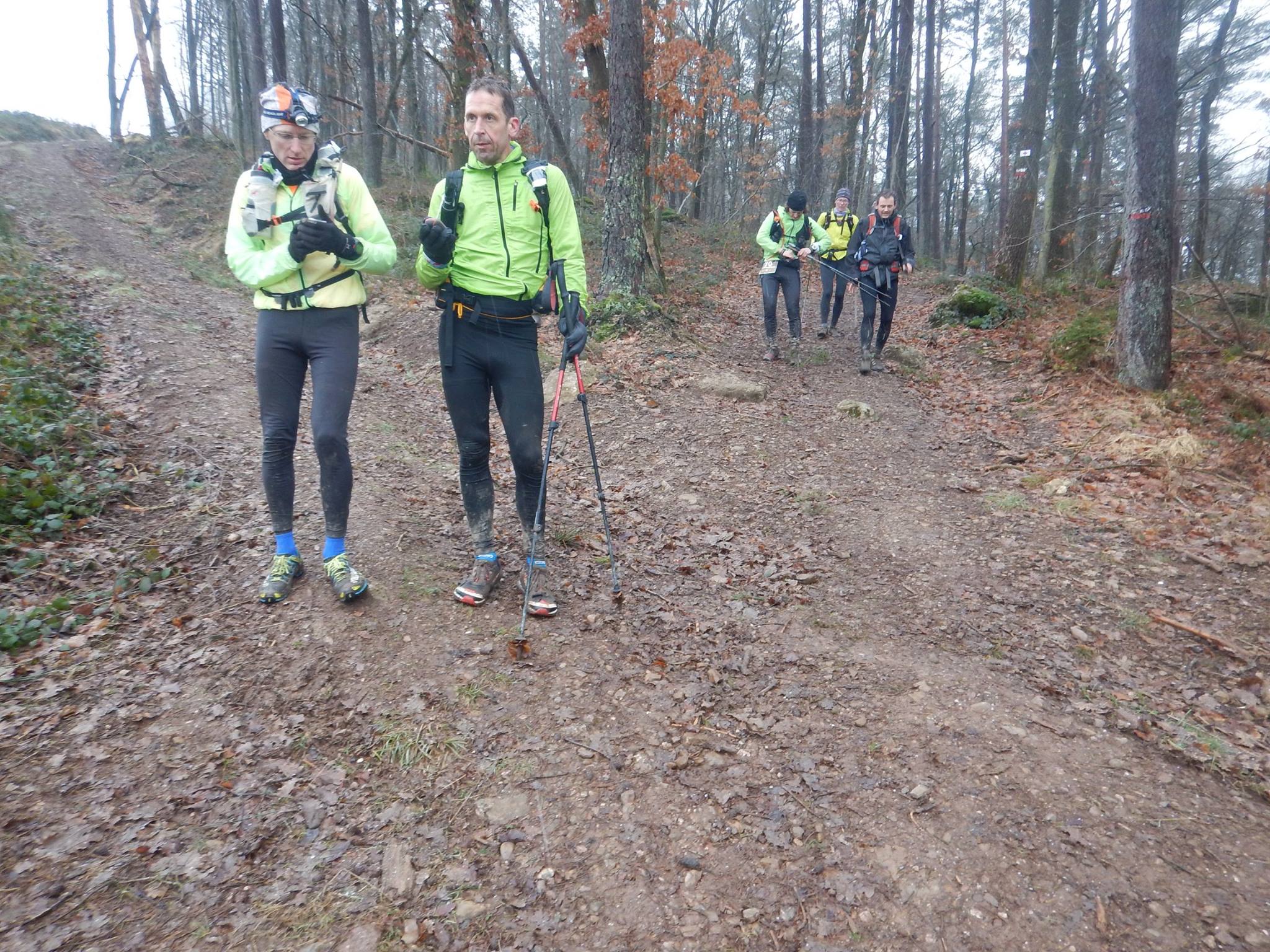 Once the first night and day had passed, people started to drop out of the race at an increasing rate… Thanks to two years of infantry training, I know a thing or two about exhaustion and especially sleep deprivation. Not sleeping is the worst. Remember that dull feeling after a short, bad night, trying to motivate yourself to go to work? In my experience, most people can go one night without sleep. Once the day dawns, you’re fine as long as you keep moving, but once that second night creeps closer… you’re overcome by terror. You remember that first night and the thought of a second one is very intimidating indeed. By night two you’re beating yourself up. The incessant voices in your head pleading every possible angle, begging for relief, are worse than the physical discomfort which is gnarly at its own right. Those who finished the race had to endure a third night on nothing more that a short cat nap here and there. By this stage, most people literally start losing their mental faculties. You begin to hallucinate. A log might seem to move momentarily. You see people and animals that aren’t even there. Let that sink in. Who can still motivate oneself in such a state? 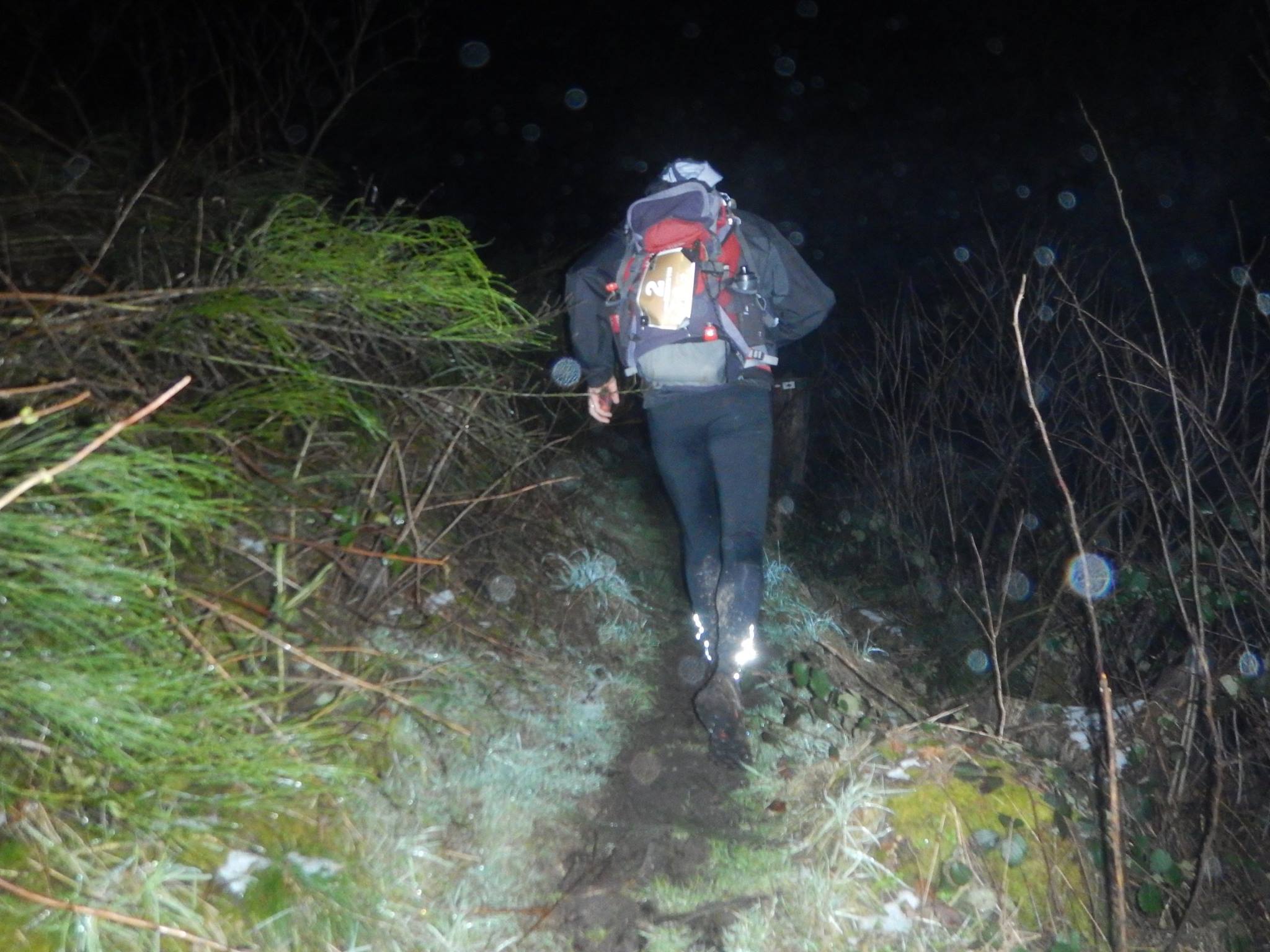 Cold wet feet, skin disintegrating like moist cake, friction spots driving you mad, overused muscles and tendons preventing you from even walking normally and then there’s wet snow and rain making everything worse. One of the contestants dropping out with a bad case of trench foot reported: “The medics had taped my feet earlier. I could feel the skin at my heels moving around and it wasn’t because the tape had come loose…” 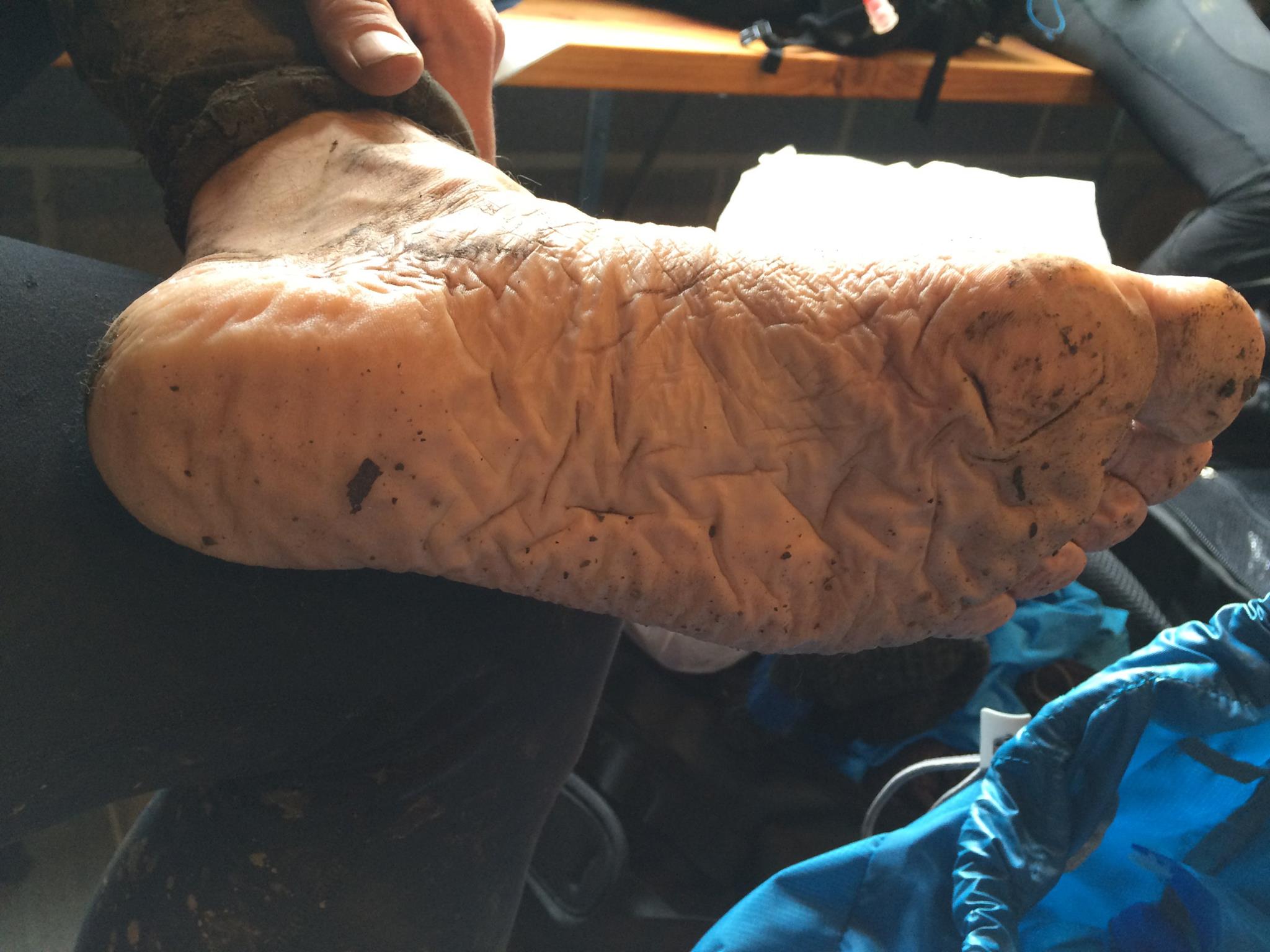 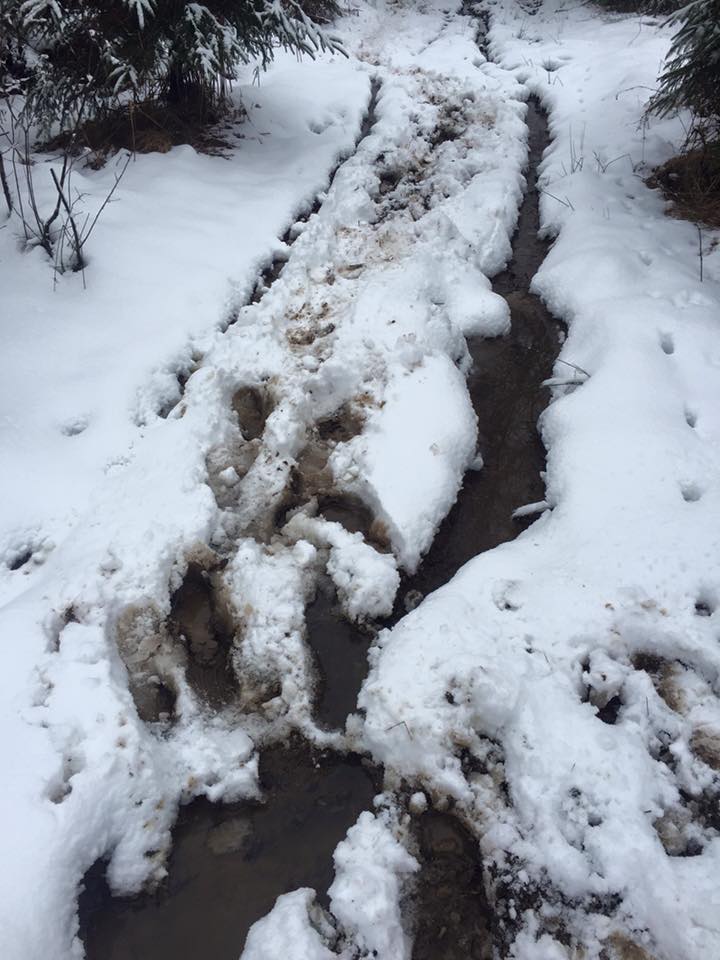 I’m speaking for myself here. After enough hours have passed, the cold you can’t seem to shake off, the mud and merciless gravity become very impersonal. When you realise that these walls of trees are carbon sucking tentacles reaching for the sun and that de darkness is merely the absence of certain wavelengths of light, you start to realise that these conditions that are killing you don’t care about you. They’re just what they are. They’re not out to get you, they are simply the conditions at that time, in that place. It is in this that we see the fulness of what it means to be human. Every bit of suffering or appreciation of beauty is happening in your mind and your mind alone. It is in situations like this that we see the extremes of endurance and willpower or species is capable of. It is memories of experiences like this that make it so that this sport is often dominated by men well into their forties or even older. Not just their bodies, but their minds have been steeled by years of experience. Often, the strongest mind drives the body that wins. 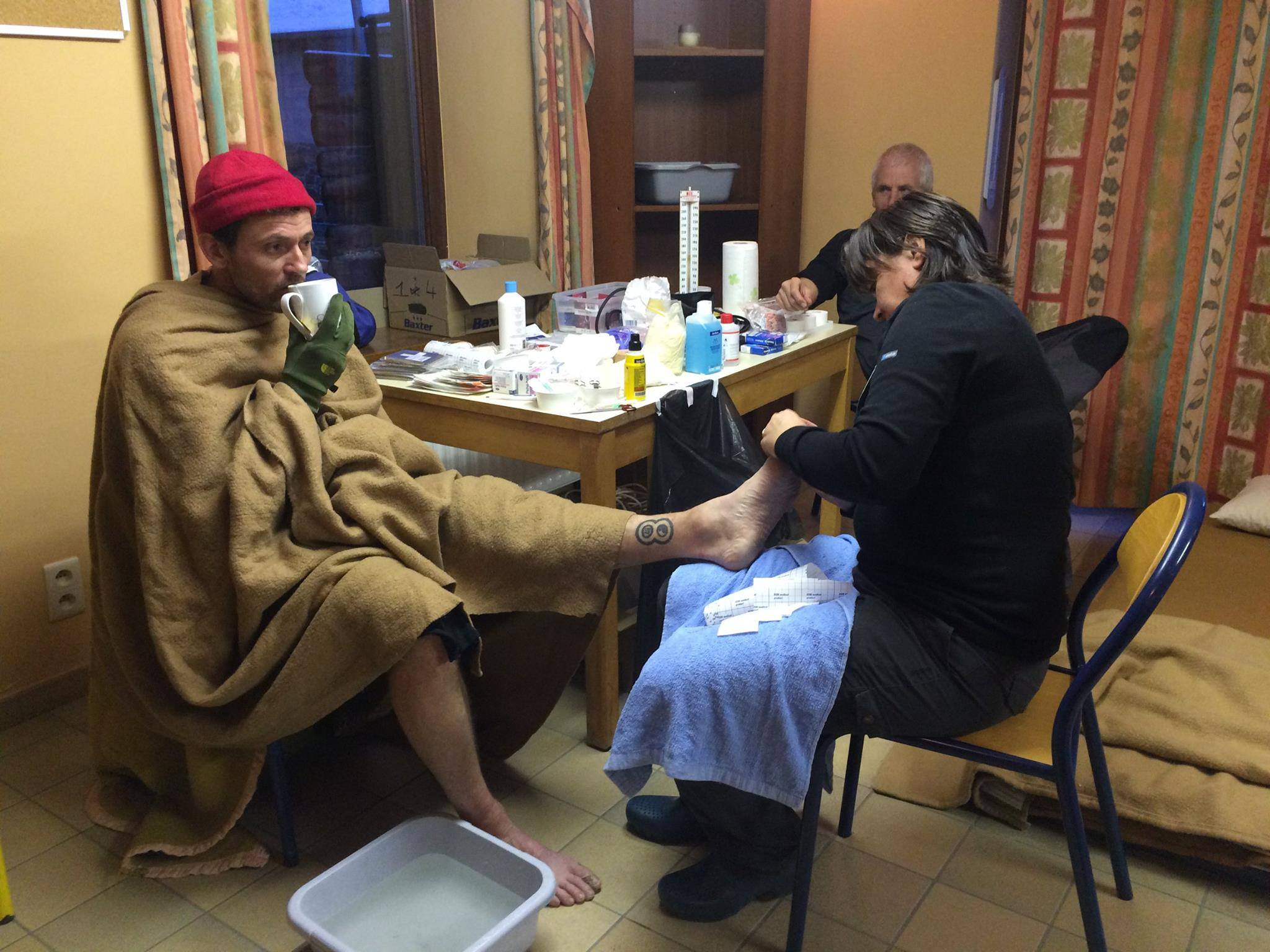 I heard an echo of this in what Michiel Panhuysen said during his talk about mental training. People who leave the race are normally marked as DNF (did not finish). He doesn’t like that term and prefers to use RTC (refusal to continue). Hard words, but he lives up to them. Michiel was one of the 15 people to finish the course.

I’m not going to mention the name of the “winner”. I’m quite sure he would agree that everyone who finished the course won and that everyone who made it at least half way through that second night is nothing short of a legend.

I truely hope the Legends Trails team will set up a second edition once they’ve had a chance to catch up on sleep and digest the huge task they had on their plates! 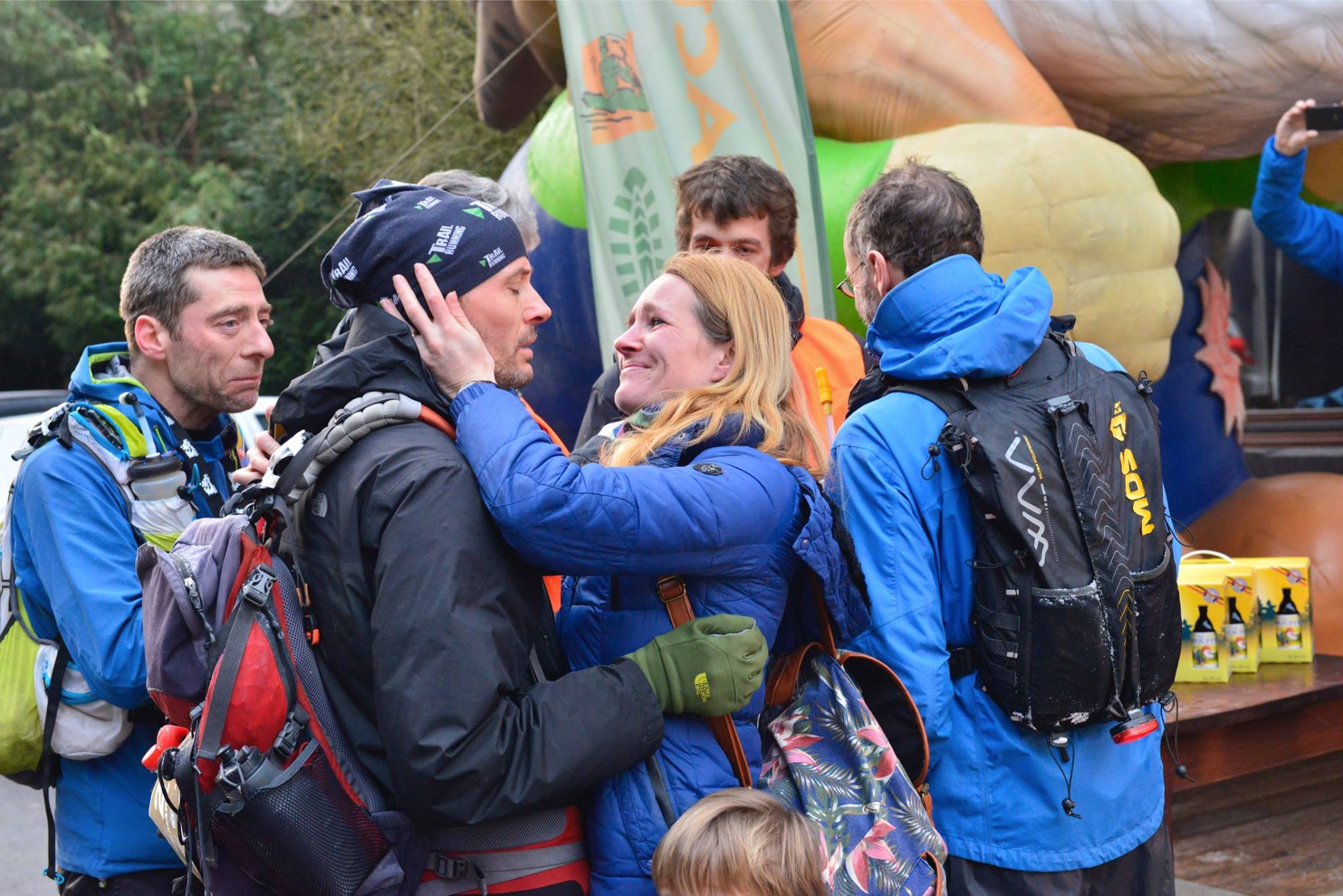